Slocan River Streamkeepers have worked with the community, for over 17 years, to protect and rehabilitate the aquatic and wetland ecosystems of Slocan River through education, restoration, and monitoring. We’ll be calling for Board of Directors nominations. Established and new members are all welcome to come! 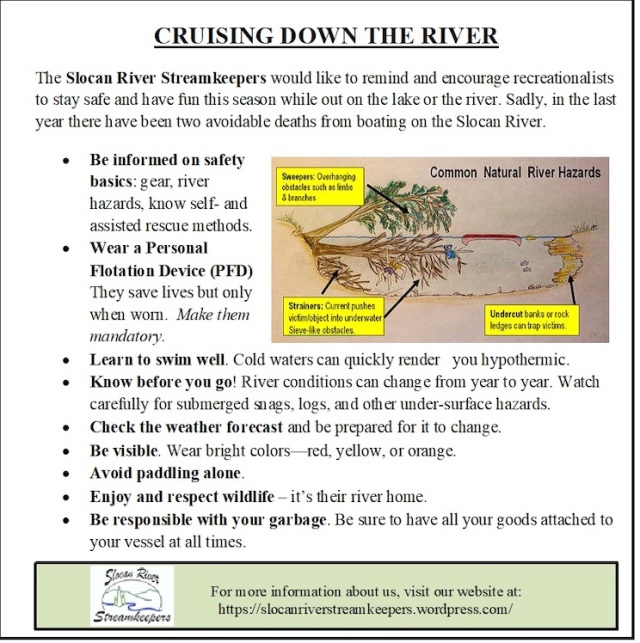 Trees falling in the river are mostly a positive thing for the ecosystem. It creates habitat for fish and other species, etc. The rootwad is large enough on this tree (photo) so that it will stay there for a while. The negative is that it open up a large hole on the river bank. We will be talking to the landowners about planting some native trees on the bank to slow down erosion.

It is also a small hazard for tubers, boaters, etc.

There are sections of the river that have more large woody debris (LWD) and others less. The challenge is that some of the riparian zone has been cleared of trees, specially large trees. So when a large tree falls in the river, there are no large trees (in that section) anymore to feed the river for a while. This is why our riparian restoration projects are very important. We are planting large numbers of native trees along the river bank every year to slow down erosion and so that eventually there will be large trees again.
Native trees also provide wildlife habitat along the river, specially large trees. 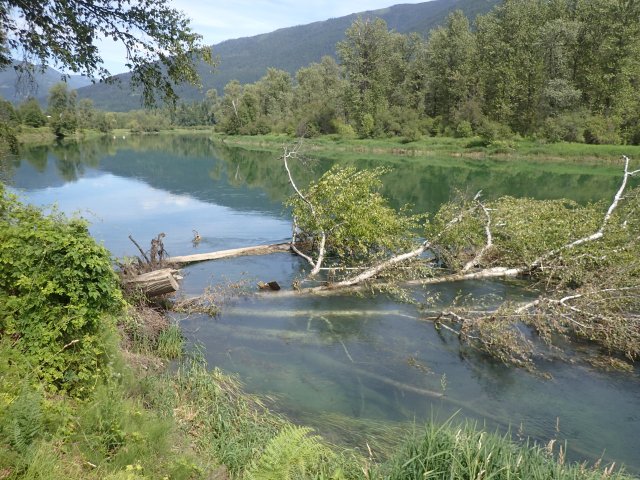 If a tree falls in the river does anybody hear?

Goulden Thurston Wetland Restoration Project in the Slocan Valley, BC

In 2019, the Slocan River Streamkeepers implemented a wetland restoration project on private land in the Slocan Valley, BC. The goal was to restore the wetland habitat and re-vegetate the site with native species to enhance functionality and attract a diversity of wildlife species. This project will provide habitat for a diversity of species including western toads, Columbia spotted frogs, western painted turtles, as well as bats, birds and invertebrates such as dragonfly.

The Slocan River Streamkeepers would like to thank all the funders, supporters, land owners and volunteers for their support for this wetland restoration project.

and with the support of

More photos and infos about this project:
https://slocanriverstreamkeepers.wordpress.com/gt-wetland-restoration-project/

Healing Earth: an Evening Presentation with Dr John Todd in Nelson, BC

We were very fortunate that Dr John Todd accepted our invitation to share his lifelong experience, knowledge and wisdom with us in Nelson, BC May 30, 2019.

John Todd is an ecological design pioneer, an innovative restoration ecologist and a marine biologist who has worked in many parts of the world for the last 50 years. He’s the recipient of numerous awards; he was the first winner of the Buckminster Fuller Challenge for the best idea to help save humanity in 2008. The entry was “Design for a Carbon Neutral World: The Challenge of Appalachia”. And in 1990, the United Nations (FUNEP) Award for contributions to the Global Environment.

His new book: ”Healing Earth: An Ecologist’s Journey of Innovation and Stewardship” was published in January 2019.

This event was co-hosted by Kootenay Permaculture Institute

This project provides a forum for documenting biodiversity in the Slocan River watershed. The Slocan Valley is an ecologically rich and diverse place in the heart of the West Kootenay region, within the globally unique inland temperate rainforest. The varied terrain and climate create a corresponding diversity of ecosystem types, including floodplains, forests, meadows, wetlands, and alpine environments.

The Slocan River watershed lies within the southern Selkirk Mountains, with its headwaters to the north at Summit Lake, and the confluence with the Kootenay River to the south at Shoreacres. It is bounded by the height of land in the Valhalla Range and Valkyr subrange to the west, and the Goat and Kokanee Ranges to the east. It includes the villages of Slocan, New Denver, and Silverton, and the numerous unincorporated settlements in between such as Winlaw, Passmore, Slocan Park and Krestova.

The Sinixt Peoples were the earliest known inhabitants of the area that is also important to the Ktunaxa, Shuswap, and Okanagan First Nations. Since the earliest European explorers, the settlement history of the Slocan Valley is marked by a fascinating mix, including miners, Russian Doukhobors, WW2 Japanese internment camps, and 1960’s U.S. war-resisters. The current human inhabitants are, like the ecosystems, a highly diverse lot, representing all walks of life.

Please upload clear photographs with as much detail as possible, including date and time, location, and habitat description. Since there is no cell coverage for much of the area, the mobile app is less useful, and it is advisable to carry a GPS or use a camera with GPS built in. Try to be as accurate as possible in locating your observation using the mapping feature.

In 2017, a wetland restoration project at Crooked Horn Farm in Winlaw was completed by Slocan River Streamkeepers, which involved transforming a 0.5 Ha area into a flourishing wetland system with the aim of providing habitat for a diversity of wildlife including benthic invertebrates.

STREAM in the Slocan

Previously, in collaboration with IER, aquatic macroinvertebrates collected from Crooked Horn Farm before and after restoration were identified by a taxonomist along with 62 samples from other wetlands. However, in 2019, benthic kick-net samples from this wetland and eight other sites collected for DNA and analysed by STREAM.

Results from a total of nine wetland sites revealed similar proportions of key taxa when compared to taxonomic identification, namely orders Diptera (flies), Odonata (dragonflies and damselflies) and Trichoptera (caddisflies). A particularly interesting finding was exclusive detection of the common whitetail dragonfly (Plathemis lydia) in STREAM samples from the Crooked Horn Farm wetland, which corresponds with visual surveys of adult dragonflies that have identified this species being a dominant at this site in 2018.

In addition to the common whitetail, a variety of other Odonata were detected in STREAM samples, including the spotted spreadwing (Lestes congener), four-spotted chaser (Libellula quadrimaculata) and downy emerald (Cordulia aenea). Wetlands provide vital habitats for Odonata, as they require flooded habitats to breed and mature. In Canada, Odonata are considered an important indicator of intactness and biodiversity richness of wetland systems, as they are sensitive to the effects of cattle grazing and wetland drying.

Overall, the wetland restoration project at Crooked Horn Farm has been a success, with numbers and diversity of birds, mammals, amphibians and insects ever increasing. Providing this unique habitat for macroinvertebrates is particularly important, as they provide a food source for other wetland species and groups of taxa, such as Odonates, act as biological indicators for wetland health and productivity.

Monitoring aquatic macroinvertebrates can be achieved rapidly and accurately using the STREAM DNA-based approach, with the data produced being compatible for comparisons with taxonomic data previously collected. For this World Wetlands Day and many others to come, using this effective monitoring approach for wetlands allows for detection and suitable addressing of changes in biodiversity, particularly in the face of climate-related impacts on wetlands.

In response to growing concerns about source-water protection, the Regional District of Central Kootenay has announced interest in taking steps to develop a stronger role in watershed governance and to support collaborative decision-making. A recent document released by the RDCK states that “Source watershed governance proposes an ecosystems based planning approach be taken that includes consideration for the land (tree and soil), water (surface and ground), air (quality), and risk (wildfire and flood hazards)”.

Ecosystem-based conservation planning is a management strategy that as the first priority “maintains or restores natural ecological integrity — including biodiversity across the full range of spatial (from very large to very small areas) and temporal (from short to long periods of time) scales.” (Silva Foundation)

In 2018 Slocan River Streamkeepers Society received a grant from the RDCK to create a document to inform (and provide recommendations) on ecosystem based management strategies to maintain the ecological and hydrological integrity of the watershed. This gap-analysis project has included two key steps: 1) a literature review, and 2) Interviews with the local scientists, members of Streamkeepers and local residents who have been involved with studies of, and conservation efforts for, the Slocan River.

For the purpose of the analysis, the study area includes the Slocan River from its outlet at Slocan Lake to the confluence with the Kootenay River.
You can download the revised version of the report here:
https://slocanriverstreamkeepers.files.wordpress.com/2020/02/gap-analysis-final_integrated.pdf 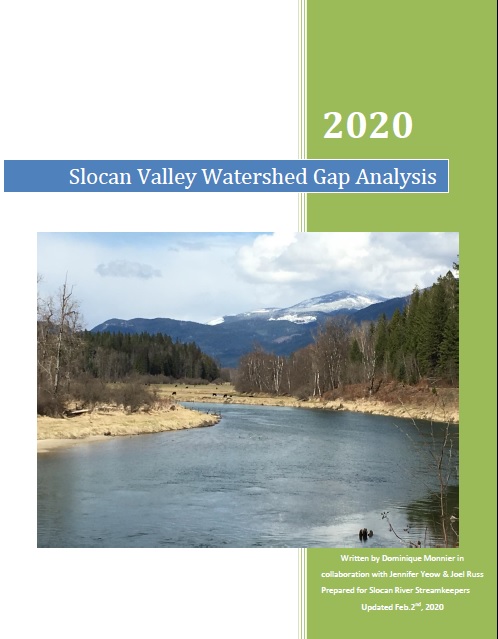 Funded by Columbia Basin Trust and Slocan Integral Forestry Cooperative, Slocan River Streamkeepers are conducting field studies to assess water quality and temperature at specific sites along Slocan River to identify long-term trends or changes to ecological processes due to human-caused factors — such as the jet fuel spill in Lemon Creek and the landslide on Little Slocan River; the monitoring of water levels of select community water sources during low flows; recording and analyzing the physical, chemical, and biological factors present at strategic and historic sites throughout the watershed.

Water-quality sampling sites are located at strategic and historic sites on the Slocan River and tributaries at Passmore/South Slocan, and on Little Slocan River. Water-flow monitoring is on four creeks between Vallican and Appledale: McFayden Creek, Rice Creek, Trozzo Creek, and Ravine Creek. The work in Winlaw Creek will involve an education outreach program with the Whole School and Winlaw Elementary School. Both the monitoring of benthic invertebrates and the Canadian Aquatic Biomonitoring Network protocol take place at the same site previously sampled on Lemon Creek.

Healing Earth: an Evening Presentation with John Todd in Nelson, BC  Thursday May 30th, 2019 at 7pm 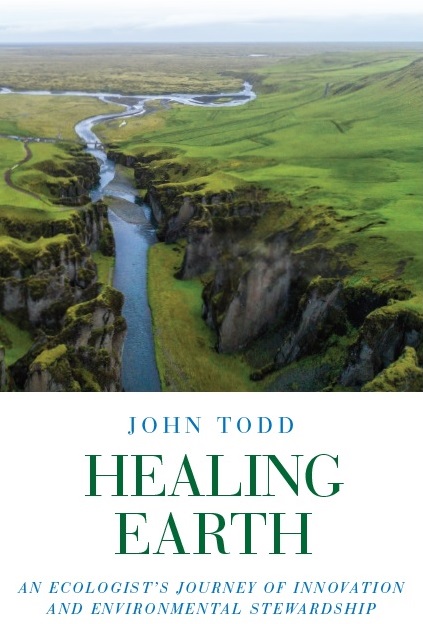 We are very fortunate that Dr John Todd has accepted to share his lifetime experience, knowledge and wisdom with us in the Kootenays.
John Todd is an ecological design pioneer, an innovative restoration ecologist and a marine biologist who has worked in many parts of the world for the last 50 years. He’s the recipient of numerous awards; he was the first winner of the Buckminster Fuller Challenge for the best idea to help save humanity in 2008. The entry was “Design for a Carbon Neutral World: The Challenge of Appalachia”. And in 1990, the United Nations (FUNEP) Award for contributions to the Global Environment.
His new book: ”Healing Earth: An Ecologist’s Journey of Innovation and Stewardship” was published in January 2019.
www.toddecological.com

This event is co-hosted by Kootenay Permaculture Institute and Slocan River Streamkeepers.

from the 2019 KCP Winter Webinar Series:

Conservation in the Context of Climate Change – Restoration in Action

The Kootenay Conservation Program was pleased to bring back the Winter Webinar Series,  from January to March.  The four-part series focused on the theme of “Conservation in the Context of Climate Change – Restoration in Action.”

WEBINAR #3: Riparian and Wetland Restoration in the Slocan Valley

This webinar is presented in collaboration with the Columbia Basin Watershed Network.

A wetland restoration project on private land at Crooked Horn Farm in Winlaw, BC was initiated by the Slocan River Streamkeepers in 2016 and completed in Summer 2017. We gratefully received funding from the Fish & Wildlife Compensation Program and National Wetlands Conservation Fund for the project.  This wildlife enhancement project has specifically consisted of creating habitat for a diversity of species including amphibians and painted turtles and also adding some bird boxes and bat houses.  (The Streamkeepers had previously implemented an adjacent riparian restoration project including in-stream fish habitat structures on the property in 2013.)

The project is located adjacent to Slocan Valley Rail Trail, hence it affords opportunities for public education and raising awareness of the importance of wetlands.