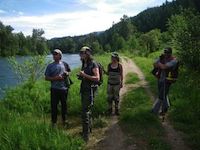 Streamkeepers, through the SWAMP Project, recently completed a report of species-at-risk discovered in the Slocan Watershed in 2017.  The list continues to grow as biologists spend more time in the field, and as concerned residents and landowners send us information. Through this project, which was largely a desktop exercise, we have confirmed 47 species-at-risk in the Slocan Watershed in 154 locations, and have identified an additional 11 species that have a high potential to occur. The species include vertebrates, invertebrates, reptiles, amphibians, vascular plants and non-vascular plants. This represents a considerable increase in the number of species-at-risk known to exist in the watershed, although several species on the list are well documented, but are not tracked, or do not show up on, CDC data.

Red-listed Mountain Moonwort (Botrychium montanum), a recent addition to the at-risk species known to occur in the Slocan Watershed.

The results of this project make it apparent that there is still much to be discovered regarding the species-at-risk that inhabit the Slocan Watershed. With every additional field check more species are found, and the range of existing species is expanded. We hope to secure funding to move beyond this desktop exercise and complete additional inventories. We recommend that a series of specific surveys be carried out in the watershed to complement previous studies. These studies would be completed by experts in their field and focus on under-inventoried areas, namely vascular and non-vascular plants, amphibians and invertebrates.

The full list of species-at-risk that are now known to occur in the Slocan Watershed as presented in the table below. Species marked with an * indicate those that are not currently tracked by the Conservation Data Centre as occurring in the watershed. 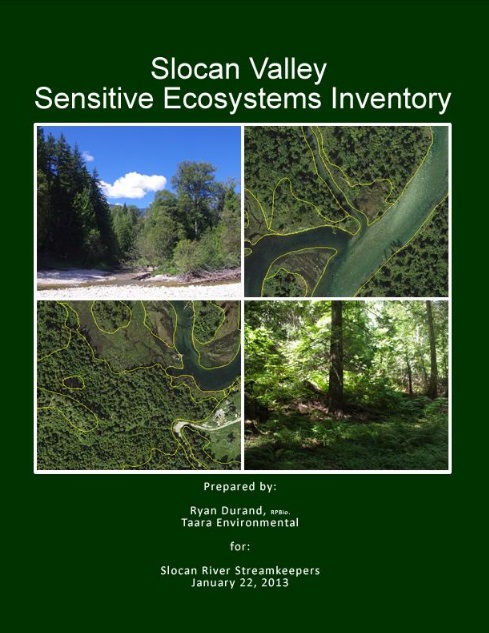 Preliminary Sensitive Ecosystems Inventory (SEI) mapping of the Slocan Valley was completed during the summer of 2012. The project was initiated by the Slocan River Streamkeepers in order to map and describe the ecosystem of the Slocan Valley and to serve as a baseline layer for future stewardship and restoration projects. Funding was provided by the Columbia Basin Trust and the Regional District of Central Kootenay.
SEI mapping was created in 1993 by the Canadian Wildlife Service and the BC Conservation Data Centre. It was created in ‘response to a need for inventory of at risk and ecologically fragile ecosystems, and critical wildlife habitat areas on the east side of Vancouver Island.’ Since then, numerous projects have been completed on the Sunshine Coast, Bowen Island, and throughout the Okanagan, and portions of the Fraser Valley. The main purpose of SEI mapping is to describe the ecological diversity of a given area, and determine the type and extent of vulnerable and rare elements.
This preliminary report describes the type and extent of ecosystems occurring in the Slocan Valley. The mapping was used to develop regionally specific sensitive ecosystem classes and subclasses which will be refined in consultation with the BC Conservation Data Centre.
A total of 3,019 polygons were mapped for the project, encompassing 10,963 hectares. Polygon size ranged from <0.1 (37m 2) to 1,222 hectares. The most commonly mapped ecosystem types were not sensitive (24.8%, 2,716.9 ha), young conifer forests (15.8%, 1,728.8 ha), and mature conifer forests (15.3%, 1,678.9 ha), while 14 ecosystem types accounted for less than 1% of the study area. Overall, the Not Sensitive classes accounted for 56.9% (6,212.7 ha) of the study area, while Sensitive Ecosystems encompassed 22.9% (2,495.8 ha) and Other Important Ecosystems was 20.6% (2,254.5 ha).

We are actively pursuing funding to support further research.